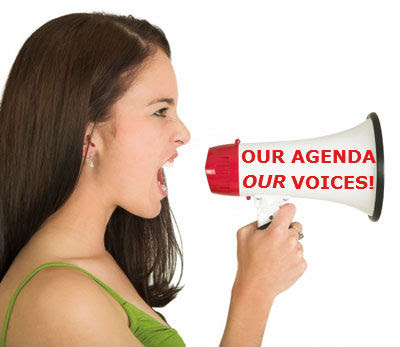 Though Equality Maryland (and many other state and national LGB”t” organizations) have serious control freak issues when it comes to dominating the transsexual and transgender community’s narrative, political movement strategy, media guide suggestions, priority level in the LGB”t” agenda and how bills pertaining to TS/TG people are written or amended, it seems more and more straight allies and politicians are hearing the cries of the TS/TG community when they say:

“Gay Inc. doesn’t represent us accurately, we are tired of being thrown under the bus constantly and we will not accept a few crumbs here and there! We are taking back our voice.”

The Maryland HB 235 bill is losing ground, which is actually a blessing in disguise because the weak bill leaves out public accommodations protections, so it’s best to propose it next year in its full and original version. The bill has been sent to the Senate Rules Committee where it's expected to die.

Senator Frosh has decided not to be spoon fed what to say by Equality Maryland, and has honestly pointed out that many transsexual and transgender Marylanders disagree with Equality Maryland’s ’incremental strategy’. Yesterday, he was interviewed in the Washington Blade concerning the tainted bill:

In yet another development likely to trouble the bill’s supporters, Frosh said his office was “inundated” on Monday by calls from transgender activists opposed to the bill because it has been stripped of a provision banning discrimination against transgender persons in the area of public accommodations. “They are livid that that was taken out and oppose the bill,” Frosh said of Trans Maryland members. “So there’s a division within the transgender community apparently about whether or not it’s a good idea."

Times are changing. Our elected officials are finally realizing that there is a disconnect between LGB strategists and TS/TG advocates on many issues. Yep, the time has come to represent ourselves, and a lot of LGB groups, and their TG loyalists and apologists, aren’t too happy about it.

Maryland transgender resident, Dana Beyer, who unsuccessfully ran for Maryland House of Delegates three times, and used to be on the board of Equality Maryland, told the Washington Blade yesterday:

"We don't trust Frosh and this seems to be his way of killing it and leaving himself with clean hands," Beyer says. "Bills don't go to Rules Committee unless there's a problem with them. This is not the normal process. There really is no reason for it. I would say this doesn't look good, and there's no excuse for it."

However, many in the community disagree that "Frosh is to blame". In fact, many are grateful to Senator Frosh for acknowledging that the bill's compromised version "may not be a good idea", and that many leaders in the Maryland community, including members of Trans Maryland and Trans United, have been calling his office and telling him why the bill must either ammended to include public accomodations protections, or withdrawn.

"Maybe there IS a problem with the bill? A great number of people think there's a big problem with this bill. Could it be that Senator Frosh agrees with them?"

A commenter then called Waldherr “naïve and Pollyanna ” to suggest that Senators would actually reconsider the bill’s merit due to the large outcry and opposition from Maryland’s only two trans specific organizations, Trans Maryland and Trans United. TransGriot’s Monica Roberts’ rebuttal to that name calling was:

"No, what’s “naive and Pollyanna” is GL rights orgs pimping an 'incremental rights' trans legislative strategy that not only doesn't work, it is harmful to the people it allegedly is supposed to help."

Dana LaRocca, a noted transsexual journalist and member of Trans Maryland, comments on this development,

"Yusef [a political writer for Metro Weekly] writes whatever he is spoon fed by the Equality Maryland disinformation team. He has no idea what is going on around him. An article in the Washington Blade has an entirely different take on it. [Washington Blade’s] Lou Chibbaro was apparently aware that the transgender community had reached out to key players in the Senate.

It looks like we got to [Senator] Frosh. Even better it looks like Frosh got under EQMD's skin. Next year is different because we have backed them into a corner and they have seen what we can do. I'm not a Blade fan. But if they upset the EQMD folk it's OK with me

Now EQMD is whining that he [Frosh] doesn't play by the rules. Well guess what EQMD - ya'll don't make the rules."

Even Maryland Senator Rich Madaleno publicly commented on the how all the attention seems to only goes towards gay marriage, though anti-discriminations protections for transsexual and transgender people are more urgent and needed. In his statement he says:

“Although much of the media attention this legislative session has centered on marriage equality, we cannot let that debate overshadow efforts to enact these essential protections. Protection against discrimination, including gender identity discrimination, is a basic human right.”

Many agree with Senator Madeleno. Let’s be real, marriage is a luxury when you can’t even get a job because you are discriminated against, or can’t use public accommodations because of your gender identity, or get denied hospital care or health care insurance because you are transsexual. But since the gay and lesbian elitists who dominate the priorities of the LGB (lets tack on T to be PC) movement have most privileges straight people do, all they are concerned about is marriage and tax breaks, and those who are more oppressed are demanded to follow what their desires are. Never mind that a large percentage of the TS/TG communities are unemployed or living in poverty level, are frequently victims of hate crimes and have less social acceptance and understanding then gays do from society.

I want to thank Senator Frosh and Senator Madelno for having the integrity to call a spade a spade, and for them compassionately acknowledging that the LGB movement does not always do right by the TS/TG community.

Transsexual, transgender and intersex Americans have had enough. They are exiting the back of the LGB”t” bus and buying their own bus. It’s high time we stop allowing our community to be used as a political bargaining chip by the gay establishment. Many elected officials and media outlets are supporting us in doing so.

We own our voices.

WE own OUR voices!

WE OWN OUR VOICES!!!

Trans Maryland members and supporters rally at The Supreme Court to oppose HB 235
Posted by Ashley Love at 2:18 PM