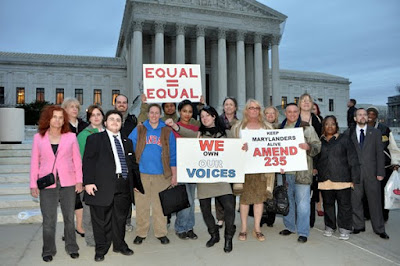 Trans Maryland’s education rally Tuesday night was such an inspiring moment, as a crowd of human rights activists marched to The Supreme Court to show solidarity with their transsexual and transgender brothers and sisters in Maryland whose basic civil rights are being denied. Around 35 people attended, and members of Get Equal DC and the International Foundation for Gender Education showed up to support. Half of the attendees were not Marylanders, but since this dangerous bill could affect us all if passed, we stood in solidarity with them. 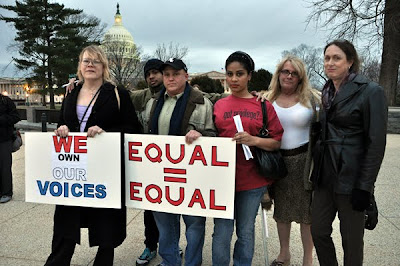 The education rally was a huge success. I learned a lot when Trans Maryland’s Media Director, Jenna Fischetti spoke to the crowd about why HB235 needs to be purposed in its original format. Denise Leclaire, Executive Director of International Foundation for Gender Education also spoke.

“Trans Maryland is overwhelmed by the support and solidarity shown by our local and national peers and allies this evening. We wish to thank them all. We marched up 1st Street, past The Cannon House Building, on our way to the Capitol Grounds across from the Supreme Court. The destination was 1st and Maryland. In exercising our 1st Amendment rights, We members of Maryland’s transsexual and transgender communities made a statement that We Own Our Voices, that House Bill 235 in the Maryland House of Delegates needs to be amended, and that going forward, it is OUR community’s responsibly, in conjunction with supportive allies when needed, to educate our legislators and the population as a whole.”

Trans Maryland hosted this education rally to draw attention to the butchered HB 235 bill which has had public accommodations protections deleted. As usual, the gay and lesbian media was silencing or misrepresenting many of Maryland’s TS/TG community’s points of view, and portraying this issue just how Equality Maryland would advise them to. Yet due to Trans Maryland’s education rally, the gay media was pressured to actually tell the other side of the coin, something one would think most responsible journalists and news sources would do, yet in the land of LGB”T” media, that’s hardly the case when it comes to TS/TG issues.

Transsexual and transgender people need these rights immensely, and the gay and lesbian leadership via Equality Maryland had no right to do a backroom deal that chopped away these lifesaving protections.

The butchered version of HB 235 is not only unconstitutional, but absurd. If the bill is passed in its compromised form, a transsexual woman may gain the protection to keep her job as a nurse at a Maryland hospital, but she could be denied emergency room care in the same hospital she is employed at if the staff were transphobic. For instance, Tyra Hunter was refused care for serious injuries by EMS worker Adrian Williams, and later by the physician. As a result, she died. Without public accommodations protections, this bill has no merit.

"I felt honored to be in the presence of real voices, speaking out for themselves without the filter of privileged peers or shell organizations, cold and callus to our needs seeking to delete and censor us. It is our experience which must carry the message to potential allies and legislators. The responsibility is on us" 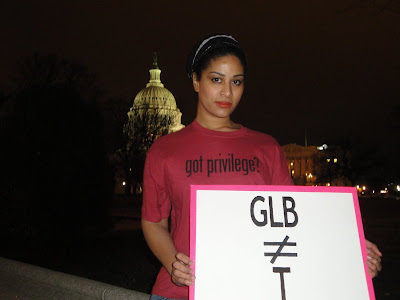 If you say "LGBT", then actually mean it. If you don't sincerely mean it, then do us all a favor and just say "LGB", this way, the TS/TG/IS can be represented accurately and fairly. We are not property of Gay Inc, nor political bargaining chips of state and national gay “equality” organizations. (Thanks to Robyn Webb of Maryland for making such a cool sign!)

Cathy Brennan, a former associate of Equality Maryland/Free State Justice, and who had a significant part a decade ago in preventing TS/TG Marylanders from anti-discrimination protections, was not too happy about Trans Maryland’s rally.

She posted in the comment section of my previous blog:

I did not know why a simple education rally would provoke Cathy Brennan to engage in such immature and unprofessional behavior. I was also curious if she even knew what “hapless” meant.

So, we are now “hapless” according to your latest rant?. Do you know what “hapless” even means?

1) PATHETIC:
If we were so pathetic, we would not have mobilized, stood up and marched to The Supreme Court and rally to be heard

2) DEPENDENT:
No, we are not “dependent”. In fact, it’s because we are choosing to be INDEPENDENT and not be treated as unwanted stepchildren and property of Gay Inc , and actually speak and represent ourselves, that has you, Equality Maryland and many who seek to keep us colonized in a fit (Just like how Equality Maryland cancelled their transgender working group)

3) VICTIM-LIKE:
If we were victims we would roll over and let this tainted bill go forward in its problematic form. If we had victim mentality we would believe we were only good enough for the crumbs you and your cohorts believe we deserve. So no, Trans Maryland standing up to discrimination means they are not victim-like, but that they are REFUSING to behave like victims

I hope you have appreciated English class today; it’s the first time I had to teach one on my blog. Don’t be late to class next week, where we will be discussing transphobia in the gay and lesbian community."