More on HRC Removing Trans Flag in D.C. Rally: Equality Really Does Mean.. Equality, Not "Some Are Created More Equal Than Others" Hogwash

Equality means equality, not "some are created more equal than others" hogwash. HRC's undemocratic behavior in demanding the removal of the trans* coalition's flag at the U.S. Capital speaks to the gay and lesbian (not transsexual) political establishment’s ongoing marginalization and censoring of transsexual and transgender issues. 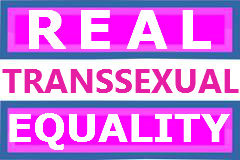 The medical condition known as transsexualism isn’t some political bargaining chip that gay and gender queer activists can misrepresent to cater to their own, sometimes conflicting agendas.

We’re tired of being held hostage on the back of Gay, Inc.’s “equality” bus because the destination these corporate board members and their hired whips drive us to time and time again is a “third gender” reservation that is anything but equal for Americans born with transsexualism and/or intersex, and more like misgendering, segregation and a violation of our patient rights. HRC is not our master, no matter how much they act like it, and we do not need their or anyone in the LGB community’s permission to self-determine our own lives.

They can try to shred our flag into submission, but will fail. The flag has broken free and is flying the winds of affirmation and authenticity, where only genuine equality is invited

One literally can’t spell the word 'Equality' without the letters ‘T’ (for Transsexualism) and ‘I’ (for Intersex).

Posted by Ashley Love at 4:47 PM No comments: