The Supreme Court has refused to listen to the appeal of John Lotter, one of Brandon Teena’s murderers. Though this good news, Teena has now been discriminated by once again, but this time by the Associated Press.

Teena was a transsexual man and was the subject of the Oscar winning film ‘Boys Don’t Cry’. In 1993, Teena was murdered along with two other people due to prejudice of his birth challenge by both Lotter and Marvin Nissen.

The Associated Press has blatantly mislabeled Teena as “lesbian” (Update: they have now have corrected and edited out “lesbian”), though it is well known that he was transsexual: He was born female, but felt and lived his life as a man. They also refer to him as a woman, though he should be referred to as a transsexual man. Many transphobic or uneducated people refer to FTM (female to male) transsexuals as “lesbian” or “gay”. Transsexualism is not the same thing as sexual orientation.

The Associated Press needs to educate themselves on transsexual and transgender issues. Part of the problem is the miseducation preached by GLAAD that says a gay male drag queen is the same term “transgender” as a heterosexual transsexual woman. It leads the public into thinking transsexual people are just dressing up, homosexuals who cross dress for fun, or have the fetish known as transvestitism.

No wonder mainstream doesn't get it right since our "allies" are pushing misinformation stemmed from transsexual-phobia. GLAAD must reform their intellectually dishonest and lazy media guide book's section of transsexualism and transgender.

Just because GLAAD seduces and produces drag and transgender reality TV people and fame chasing “trans spokes people” to co-sign their miseducation and bite their tongues when GLAAD does it wrong, doesn’t mean the rest of us will sell out our community for our own gain. We demand accurate education, NOW!

Brandon Teena deserves to rest in peace. Let’s respect hiM as the man he was.
Posted by Ashley Love at 2:15 PM No comments:

Many Christians, Including Me, Support Kristin Chenoweth's Choice to Star in ABC's New Show 'GCB' -Good Christian Belles. Hypocricy Should Be Exposed! 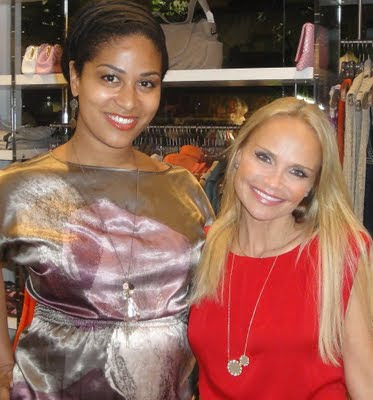 Was thrilled to meet Krisitn Chenoweth last summer at an event hosted by actress Rosario Dawson in LA. Kristin is super friendly and warm, not the sterotype Hollywood pushes about successful Broadway stars.

Tonight was the series premiere of ABC's TV show 'GCB' (after the book entitled 'Good Christian B*tches') starring Broadway star Kristin Chenoweth, who played Glenda, the Good Witch in the original cast of Broadway’s Wicked, my favorite musical! Chenoweth is open about her Christian faith; she also doesn’t shy away from voicing her disagreements with certain Christian-identified individuals who militantly promote ignorance and fear, such as last fall when Chenoweth was interviewed by CNN’s Piers Morgan and she publicly opposed Michelle Bachman’s phobic rhetoric. That's right, on top of being a talented singer and actress with numerous awards, she is a socially conscious and responsible advocate who promotes change towards more accepting and harmonious ideals , including the change needed by some in organized religion. Whether she's being interviewed on TV or the red carpet, or giving quotes to journalists, she always shares her beliefs that diversity in human beings should be celebrated and accepted, not feared, bullied or condemned. This is why Kristin Chenoweth is absolutely perfect to star in GCB, a show that will no doubt bring the truth to light about those who misrepresent and misuse Christianity.

Though it’s pretty simple ideals to ‘live and let live’ and ‘love thy neighbor’ and ‘diversity is the spice of life’, some critics of GCB claim “confusion” as to why any Christian would be a fan of a show (let alone star in one) that brings out the skeletons in the Church’s closet. It’s unfortunate that some of these critics have been misled to their state of “confusion” and can’t seem to come back to the light, and I pray intuition and warmth finds and awakens them. Yet GCB's confrontational message is wholeheartedly welcomed by many Christians because we refuse to co-sign any of the ill-conceived fear-mongering, prejudice against minorities, and attacks against a woman’s right to govern her own body and health (the list goes on) that a hostile fraction of self-proclaimed Christians promote.

It’s 2012 (thank God) and strong oceans of enlightenment and open-mindedness are flooding the collective human consciousness in this country and around the world, causing more and more to reject what we find to be misinterpretations (if not blatant rewrites and patriarchal spins) of Jesus’ authentic and universal message of neighborly compassion, selflessness and forgiveness. It hurts, embarrasses and alienates many of Christians to witness some people in our Faith use Christianity as a weapon for messages of intolerance, ambition stemmed from greed and power, and/or narrow and mean-spirited ideas of how to treat those in the universal human-being congregation who were born different (or who just don’t want to fit in by choice!).

I disagree with the ridiculous propaganda pushed by media outlets that says GCB’s premise encourages “hate and ridicule on Christians”. Truth be told, it’s actually the other way around. The intention of the show (apart from entertaining us with laughter and drama) is to unveil how contradictory it is when one identifies as Christian, yet mistreats, or even outcasts, people that they either dislike, envy, don’t or refuse to understand and/or are afraid of. The portrayal of some of GCB’s characters tonight shined a much needed light on hypocrisy such as when some of the show’s characters stood on self-righteous soap boxes with “more Christian than thou” comments, yet moments later lied, cheated, stole, bullied and a string of other actions which they had just condemned. Personally, as a Christian I wasn’t offended because I can testify that my whole life I have witnessed people firsthand who mirrored the GCB ladies' duplicity.

I admire Kristin Chenoweth’s courage to accept a role which will garner her judgments and personal attacks from fellow Christians, yet I think she must know there are many Christians who feel as she does about acceptance and openness. I also appreciate her integrity, as there are many professionals in the entertainment industry who feel similar as her, but won’t admit it publicly for fear of losing not just fans, but career opportunities and financial gain.

The show’s billboards have the following quote: "Love Thy Neighbor”. Yes, this action of “loving your neighbors” is precisely what I feel GCB has the potential to inspire towards and within certain Christians who have been misguided, except it will be a tough kind of love which holds a mirror up to their faces in hopes that they will realize that if it’s not unconditional love they are preaching or following, then it’s really not authentic love at all.

Posted by Ashley Love at 6:10 PM No comments: