GLAAD Responds To Silly & Untrue Accusations of "Trans Gate", and Still Stands by their Petition that Defends Transwomen! 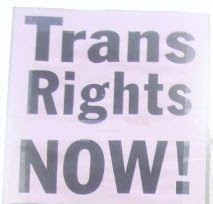 GLAAD’s Call to Action asks that Tribeca not give a platform to a film that sensationalizes anti-transgender violence and misrepresents the lives of transgender women. When Tribeca announced its film selections, almost immediately GLAAD received numerous emails from upset transgender advocates asking GLAAD to speak out.


In just one day, over 800 community members and straight allies have sent e-mails to the Tribeca Film Festival voicing their concerns about the film and opposition to its selection for this year’s festival.


Last month, GLAAD was asked to meet with the director and cast members prior to seeing the movie to educate them about transgender terminology and issues facing the transgender community. During that meeting, GLAAD was not shown the film and voiced strong concerns about the title and the use of the word "tranny." While the word is used by some, it is largely an insult that is offensive to many transgender people. The filmmaker has elected to keep it, despite its potential offense.

At the time of the meeting, the film didn’t have a distributor or any major platform. Every year countless independent films are made and most remain unreleased. Showing at the Tribeca Film Festival offers the film a national space to spread its inaccurate message to thousands. It is because of this platform and the recognition it provides that we are standing with many in the community and raising our voices.

When GLAAD watched the film screener and trailer, we were immediately concerned about not just the title, but the film’s content and its exploitation of transgender victims Angie Zapata and Jorge Mercado in its trailer.


Filmmakers have the right to pursue his or her vision. However, film festivals and other media distributors have the responsibility to consider the consequences of advancing that vision.


GLAAD hopes that an institution as respected as the Tribeca Film Festival would be concerned about how this film trivializes violence against transgender people, concerns that the filmmaker has repeatedly shrugged off.


In the wake of this outcry, GLAAD and many other transgender advocates ask that Tribeca rescind its selection of “Ticked-Off Trannies with Knives.”“Negative and stereotyped media portrayals of transgender people hurt the community because Americans still need more education on transgender issues,” said Kim Person, Executive Director of TransYouth Family Allies. "The images in this film make a mockery of their lives. I want more for my child and all transgender people.”

About GLAAD
The Gay & Lesbian Alliance Against Defamation (GLAAD) is dedicated to promoting and ensuring fair, accurate and inclusive representation of people and events in the media as a means of eliminating homophobia and discrimination based on gender identity and sexual orientation.
register for updates or donate today
Posted by Ashley Love at 9:58 AM