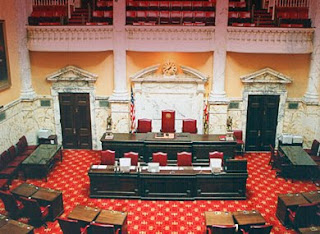 I was interviewd today by The Advocate about why the compromised version on HB 235 must either be ammended or withdrawn. It's great to have a national LGBT news source tell both sides of this story. Many LGBT news sources have been censoring the dissent against this bill from the transsexual and transgender community, and only expressing the gay and lesbian (not transsexual's) leadership's POV via Equality Maryland's 'talking point' team. Article below:

Md. Gender Identity Bill on the Move By Julie Bolcer

An endangered gender identity antidiscrimination bill has been moved to the Maryland senate judicial proceedings committee, where a hearing is scheduled for Thursday.

The Gender Identity Antidiscrimination Act, which had appeared dead for the year, was moved to the more favorable committee Tuesday morning after extended public pressure that included hundreds of constituent calls and e-mails.

"This important piece of legislation that will extend vital protections to Transgender Marylanders in housing, employment, and credit lives to see another day thanks to the tremendous leadership of Senators Jamie Raskin and Rich Madaleno both of whom were instrumental in making sure the bill moved out of the Senate Rules Committee,” said Morgan Menses-Sheets, executive director of Equality Maryland, in an e-mail to The Advocate.

“Other legislative allies, including delegates Joseline Pena-Melynk, Ariana Kelly and the LGBT caucus can also be attributed to keeping this bill alive,” she said. The seven members of the house LGBT caucus sent a letter to senate president Thomas V. Mike Miller last week urging him to allow the bill to be passed from the rules committee to the judicial proceedings committee.

“This bill would offer limited protections with respect to employment, housing and financial security,” wrote the caucus members in a copy of the letter provided to The Advocate.

“In the hearing in the health and government operations committee we learned the transgender community has double the national average rate of unemployment (14%) and 90% face discrimination or harassment at work. With regard to housing, 11% report having been evicted for being transgender and 10% have been homeless.”

The bill has divided transgender advocates, however. Some groups opposed to the measure, including Trans Maryland and Trans United, say it offers inadequate protections by failing to include the category of public accommodations, which encompasses restrooms, hospitals, restaurants, transportation, shelters, and other public areas. Delegate Pena-Melynk, the lead sponsor of the bill, said the category was excluded in order to secure passage of the bill, which has failed over public accommodations in the past.

Transgender and transsexual advocate Ashley Love called the measure a “second-class bill” in an interview with The Advocate, likening the proposal to settling for civil unions instead of marriage equality. She said that removing protections for public accommodations could set a dangerous precedent by buckling to conservative critics around the country who focus on the issue of bathrooms in trying to defeat transgender rights legislation.

Love indicated that she and others would continue to advocate against the bill.

A senate source confirmed that testimony would be heard on the bill in the senate judicial proceedings committee this Thursday at 1 p.m. The hearing time is likely to be abbreviated due to the volume of unfinished business as the Maryland state legislature approaches its adjournment date of April 11.
Posted by Ashley Love at 5:54 PM