Does Dan Savage Get Off On Demonizing President Obama? Why Is Mr "Anti-Bully" A Big Bully Himself? 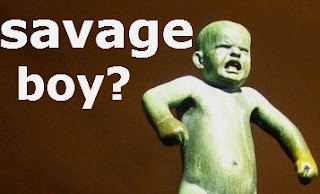 Seattle based gay advocate (I didnt say LGBT on purpose because I have yet to hear Savage care about true trans inclusion) Dan Savage is …well…a savage. Yesterday Savage wrote a letter to the president saying “F*** you” called “Confidential To The White House”: http://slog.thestranger.com/slog/archives/2010/10/11/confidential-to-the-white-house Very classy Danny! The same month Savage starts the “It Gets Better” campaign (where he does a video speaking out against bullying), days later he writes a nasty vitriol filled letter attacking the president, becoming a bully himself!

Another Seattle based activist named Andrew Caldwell replies, “Indeed. Sad, so sad. Dan has a great project with "It Gets Better," and the White House reached out and he screamed expletives back at them. (And we wonder why the DC establishment doesn't give us any political crediblity...) He Gets Bitter.”

These endangered youth should be our top priority, not the right to fight some war over seas and steal resources from other countries. I just don’t understand why he feels demonizing and scapegoating ONE MAN is productive. President Obama is not a messiah with magic powers. He is an elected official. He has to work with the courts, Congress and the people to ensure social justice. I wish Savage would write his irrational letters to the Republican Congress, since they are the ones truly delaying LGBT liberation, not the president. History shows that all social change movements have occurred through incremental change, not over night. If anyone knows Savage, can they tell him that it really does get better? And it has! Read this article that’s highlights FORTY things the Obama Administration has done for LGBT equality called “Accomplishments by the Administration and Congress on LGBT Equality” http://www.equalitygiving.org/Accomplishments-by-the-Administration-and-Congress-on-LGBT-Equality

I don’t know him well enough to say he suffers from internalized racism, but wouldn’t be surprised due to the fact that he started the unfounded propaganda that it was the African American community who was responsible for passing Prop 8. Data showed that to be false.

Did Martin Luther King ever swear at the president? No! Why? Because he was smart enough to know it would alienate allies. Im begining to suspect some people in our community want the classist Republicans to win, but they wont admit it.

Concerning the “It Gets Better Campaign”, many transsexual, transgender, intersex and gender non-conforming people are disappointed in the campaign’s non-inclusive language and gay appropriation of those in LGBTQI community who are not gay or lesbian. To have the PSA refer to the LGBTQI community as “gay and questioning youth” is inaccurate because sexual orientation, medical conditions, birth challenges, chromosomes and gender identity are not all the same thing (though many transphobic people would argue they are). The good news is that many trans organizations are currently creating an anti-bullying campaign which will be trans and gender specific, because words and messaging matter, and trans youth deserve understanding, accurate education/terms and respect.

I think Dan has an influential voice, it’s just unfortunate that he behaves like a dodgy Tea Bagger one day, and a savior of teens the next. Savage should do all the teens he is reaching out to a favor and not taint all his good work he is doing with the “It Gets Better Campaign” by turning around and slandering the president WHO HAS DONE MORE FOR THE LGBT COMMUNITY THAN ANY OTHER PRESIDENT IN HISTORY. I respect that we need to keep up the pressure on the government and Congress, but can we please reconsider the method of “over the top bullying?”

A good intentioned activist who calls himself “Just Say No” (and lives in the same town as Savage) left a comment under Savage’s hostile letter yesterday saying, “No, Dan Savage, Fuck You. As a volunteer with a Seattle-based gay rights group I am out in the field every weekend canvassing door-to door in places like Bellevue and Federal Way for Democratic candidates who have taken tough votes in support of our issues because it was the right thing to do. Fuck you, because every time you tear down the president you demoralize the Democratic base and literally drive down the progressive vote and ensure the election of every retrograde, savagely anti-gay, tea-bagging wingnut out there. Fuck you, for having the nerve to think you speak for me. Fuck you for making a difficult job more difficult than it already is. I don't know when you self-appointed yourself the leader of all that is gay in America but until you're ready to stand for election or actively work with somebody who is, you're just another media fame-whore and the only thing that distinguishes you from someone like Ann Coulter is that she throws her hate-bombs from the right and you throw yours from somewhere inside your capacious and worn-out ass. Fuck you.”

Do Savage and his kind realize that they are doing precisely what the classist, racist, anti-LGBT liberation Tea Baggers want them to do? I’m scared for our community’s future. So many activists are alienating our biggest allies, and if they keep up their smear campaigns against the Democrats and President Obama, the vote may get split, and it will be another 8 years of the GOP, and they were the ones who voted for DADT and against ENDA, not the Democrats. Wake up Danny boy, wake up!
Posted by Ashley Love at 3:08 AM