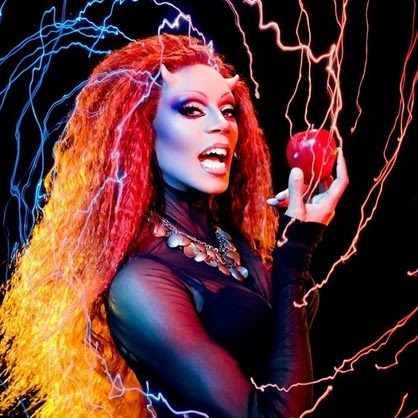 Thank you to MTV / LogoTV and Viacom for publically distancing themselves from disgruntled employee RuPaul after his recent emotional melt-down where he lashed out in response to Logo rightfully siding with the trans community by banning trans hate speech on their platform.

Logo affirmed that trans people's safety, equality and basic human dignity are more of a priority to their network than appeasing certain gay male entertainer's unhealthy insistence on using (and capitalizing off of) misogynistic and transphobic slurs in front of millions of impressionable viewers. Logo's pro-trans-humanity resolution is cause for celebration and even healing between the often conflicted LGB and T* camps, yet somehow this step forward triggered RuPaul for he immediately lashed out in spite.

In a May 19th podcast interview he literally referred to all trans women who find his transphobic jokes and double standards unacceptable as "b*tches" and continuously used anti-trans slurs.

Not an olive branch and not a 'meet in the middle' - just this immature 'sore losers' tantrum. Very disappointing. The mother and healer in me is feeling his pain, but, unfortunately, he appears to be consciously unaware of how misguided his "victim artist" role is (especially when he recently criticized actress Amanda Bynes on Twitter for using the slur f*ggot, even though she pulled a RuPaul and said, "But I didn't mean it in a bad way". He still didn't buy her defense of her slur usage - and guess what big man, we don't buy your identical defense either.).

How can he not see that just like he and many other gay men don't like non-gay men saying the word f*ggot or other homophobic slurs, trans women and men also do not appreciate gay men appropriating anti-trans slurs as a means to appear edgy, funny and shocking, no matter the cost to the actual community who the slur is hurled at.

Logo quickly made it known that they disapproved with RuPaul’s podcats rant. Then on Twitter the 'reality star gone hate-slur advocate' desperately continued his push back against Logo for holding him accountable for his defamation against transsexual women - who he laughingly described as male clowns in dresses last year during an episode of RuPaul's Drag Race and publically mocked their medically necessary healthcare.

Strangely enough, RuPaul has unknowingly joined the ranks of far right and ultra-phobic group Focus on the Family who also misgender and refer to transsexual women as "tr*nnys, she-males and cross dressers" in political campaigns and literature aimed at dehumanizing and disempowering trans* Americans.

Reality Check: It's 2014, not 1985, and numerous companies and media outlets finally deem transphobia just as offensive as racism, sexism and homophobia.

So when you judge Duck Dynasty and others for their homophobic comments honestly ask yourself why you feel entitled to then make equally offensive comments about others.

Your well documented hypocrisy has made clear that this so-called debate is not really a debate at all for your very own campaign against anti-gay slurs is no different than our fight against you using anti-trans slurs.

Your illogical spin vanishes under the light.

And yes, Logo actually has "distanced itself" from your transphobic jokes and abusive rants by making multiple public statements expressing that enough is enough! Their network will not abandon doing the right thing by transsexual and transgender Americans just because a handful of gay male entertainers feel their celebrity status and fan base gives them special allowances to foster an unhealthy workplace environment or create media content where the women in my community are made targets of propaganda that misgenders and dehumanizes us.

The choice could be yours to maturely move forward as a man who has consciously unconditioned himself of feeling entitled to dictate to women what is or isn't acceptable for us to be offended by and to instead evolve as an authentic ally who sincerely listens. We all make mistakes but the good news is we all have the chance to grow.
Grow up and gain some compassion.