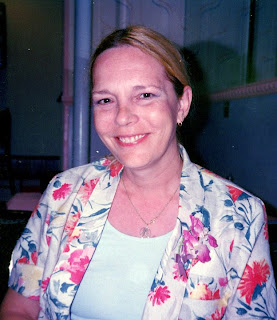 Transsexual Medical Rights Pioneer Suzan Cooke
Suzan Cooke is a longtime veteran in the struggle for women born with transsexual and/or intersex medical conditions. She has been very intrumental is combating the epidemic of her community being marginalized by some of the transgender identified people, cross-dressing males and gay/lesbian politicos who have usurped the definition of the transsexualism birth challenge into either a game chip to be used by Gay, Inc and TG, Inc to further their sexual-orientation only agenda, or to miseducate the public into thinking transsexualism is an "identity or expression", when in fact it is a biological and medical condition (transsexual women are not drag queens, crossdrsssers, gender queer activists, etc).

Currently, Nikki Araguz, a heterosexual female in Texas dealing with a law suit pertaining to her birth challenge status, is being misrepresented by Transgender, Inc and Gay, Inc. in a way that pigeonholes the particular needs, facts and human rights of transsexual and intersex Americans.

'Trans Forming Media' asked Suzan Cooke for a statement regarding the transsexual community’s current protest of transgender blogger Autumn Sandeen’s misgendering and declassifying of Nikki Araguz, and Sandeen and Gay, Inc's sneaky strategy of wanting to make Nikki's case about their "same sex marriage" agenda. How many years must all LGBTQI and TTI issues be about privilged gay and lesbian folks getting married? There are other issues! And dishonestly trying to miscontrue the facts of Nikki's case to continue their campiagn is just shameful. Sandeen is employed by the gay and lesbian establishment via Pam's House Blend (Pam Spaulding’s blog). Sandeen has a long history of misrepresenting transsexual issues, yet as the gay and lesbian establishment keeps on rewarding Sandeen for compromising the transsexual and intersex communities, we do not see Sandeen stopping anytime soon. This is why many are speaking out.

The good news is that many in the transsexual, transgender and intersex (TTI) communities are uprising against the constant LGB appropriation of TTI issues. This appropriation advances only the privileged gay and lesbian people (and the transgender people they fund), yet sabotages the hopes of transsexual and intersex Americans achieving human rights and social and cultural understanding and acceptance. Times are changing. Enough already.

Instead Transgender Inc uses the willful confusing of post SRS people with non-op transgender people to further their particular goals.

This is not meant to target any particular person putting forth the party line of Transgender Inc. Nor is it meant to denigrate the goals of non-discrimination nor the rights to live as one chooses with all ones human rights protected.

This becomes more a matter of our demanding a say in how we are represented and a say on how matters that are of vital concern to us are represented"
Posted by Ashley Love at 3:22 PM